Horse Spirit Animal – Wisdom and Meaning Behind It

Home » Horse Spirit Animal – Wisdom and Meaning Behind It 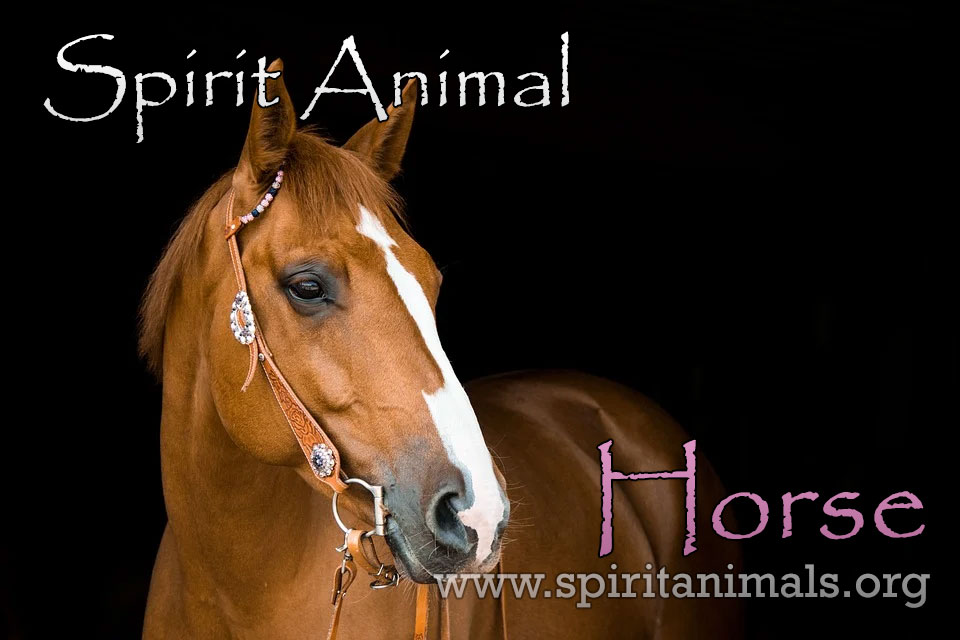 Humans are deeply connected to nature, we all are a part of a huge cycle of life, elements of the universe that aspire to achieve their dreams and lead a beautiful life. Physical-world is not the only space that exists in this universe. Something a simple human eye cannot comprehend – a spiritual realm of powerful deities, also called spirit animals, that become our guardians once we establish a secure connection to them – are also part of our world.

Spirit animal, also called a power animal is a spiritual creature, the quantity of pure energy that has its characteristics and charms, depending on in what animal form it is represented as.

There are quite many variations of the spirit animals and they all have different powers, positive and negative traits.

Throughout life, we feel a connection to them, once we allow our senses to be open and become more welcoming towards spiritual energies, we will feel a slight connection with some different deities – spirit animals.

Having good dynamics with your spirit animal is not an easy job, it requires knowledge of deeply understanding how these energies work, how to summon them, and how to connect to them on higher frequencies.

That is why, this article will allow you to gain the needed information about your guardian animal, and in this case, the focus will be on – horse spirit animals.

Horse as a spirit animal represents passion, loyalty, and strength.

Meaning and Symbolism of the Horse as Spirit Animal

Love for freedom is the most prominent personality trait that people with horse spirit possess. This beautiful creature is all about leaping through the boundaries, exploring the spaces freely, and overcoming obstacles at ease. They do not fear failure and are eager to take on every upcoming challenge.

A horse as a spirit animal symbolizes the soul without restriction, continuously evolving, getting stronger and stronger. Character development is something they thrive towards.

Also, the horse as an animal guardian is mostly associated with courageous nature. They are very fearless and optimistic about different life experiences. Losing equals life lessons for them and they never get the failure to shape them in an unwanted way.

In many cultures, horses were considered as life worth wisdom that was very precious and practical at the same time. How to navigate during hard times, avoid giving up in certain circumstances, and survive on your own – was the embodiment of the sacral knowledge that the horse spirit represented.

A horse as a spirit animal is very daring. They are very free-spirited, so they do not enjoy being framed or constrained by beliefs or social ideals. They have their ways of fulfilling their aspirations and confronting other people if they feel the slightest pressure from them – is a very casual thing for a horse spirit animal.

Being expressive about inner desires and views comes very handy for a person with a horse spirit animal.

In different cultures, the horse was always represented as a rebellious, strong deity, that guarded the people who worshipped its energy.

Horse spirit animal is known for its distinctive positive powers, and these are the few main positive traits, that this spirit possesses.

Confidence: these deities embody a sense of confidence and high self-esteem. They are rarely discouraged by random insults or superficial criticism. They know their worth and do their best to live up to it, throughout their life. They seem very preserved and elegant when in unknown surroundings, so this charm of mystery always follows their presence.

Unconventional: horse spirit animals love freedom and being in unframed environments. Oftentimes, they are pressured by general social beliefs and norms, but they never lose their authenticity of a free-spirited creature and work hard to pursue what they believe in. They have their dreams and aspirations, and no matter how unattainable their goals might seem, they never stop going after what they desire with all their hearts.

Adventurous: people with the horse spirit animal energy are true explorers. Wild nature, rough roads, unknown mysterious environments, new people, and fascinating experiences always pull them near. They love traveling and meeting inspiring individuals, and since they like taking risks and are very open about their most deep desires, uplifting and thrilling romantic relationships are oftentimes common happening in their lives.

Endurance: often being forced to merge into stressful environments, because of their competitive nature, they can withstand the harshest situations and pressure. That’s why, people who possess the energy of a horse spirit animal, are oftentimes very successful in their careers and have a great sense of true leadership.

As the horse spirit is characterized by very powerful positive traits, it also has its negative sides. Knowing them will help you to understand how to connect with your guardian animal even better.

Overpowering: sometimes with their strong sense of individuality and dignity, horse spirit animals tend to have a very dominant approach towards people close to them. They might seem overpowering and bossy, which might irritate some individuals.

Dismissive: Horse spirit animals are sometimes overly focused on themselves and their needs. They get so carried away with accomplishing their goals, they forget that people dear to them also need attention and care. Horse spirit animals become oftentimes dismissive and apathetic around their friends and family, as they tend to prioritize their self-development from time to time.

Hot-tempered: people with horse spirit animals find it hard to control their temper occasionally. They get riled up by injustice and bad manners, so getting them angry is a really easy task. Throughout their lives, horse spirit animals master self-control to the fullest and tend to suppress expressing their boiling anger in social settings, only to avoid unwanted conflicts and confrontations.

The word “totem” comes from the languages ​​of the Algonquin people and means “Family Name”. Different groups of people, families, or tribes, considered totems that were presented in an animal form, to be their ancestors, protectors, or spiritual guides.

Traces of totemism are quite well preserved all over the world. It can be encountered both in the oldest cultures and in civilized societies, although the origin country of totemism is still considered – southern Canada (Ojibwe People).

Although totemism can be viewed as an almost forgotten belief that rarely can be discovered in developed, industrialized countries, the distant echo of the totem animal culture can be still heard in modernity. Perfect examples of Totemism are using a talisman, an emblem of a sports team with an image of an animal or plant, and so on.

Each animal totem has its special power.

Very few animals can be found with the same strength, self-confidence, and elegance as a horse animal totem. With the help of a horse totem as a spiritual guide, you can embrace the true taste of freedom and move spiritually forward to new adventures, because the faster you run the easier it is to overcome obstacles. When a horse becomes your totem, it signifies more freedom and endurance.

How to Call Animal Spirit of Horse for Help?

Try to imagine a divine cosmic force always guarding you in a form of a horse. It is fast and powerful. It appears whenever you are in need and uplifts you during stressful times.

After some time of frequent practicing of visualization, you will feel much more connected to your guardian animal and will be able to call it when you feel your surroundings draining your energy.

One of the most important channels of communication with the spiritual world is dreams. Particular attention should be paid to repetitive dreams and the vivid details perceived in them. Spirit animals mostly appear to us during our dream states.

While these types of dreams are usually vague and confusing, try to memorize, write, and analyze them. Probably you had vivid dreams in childhood or even now when you could communicate with some type of animal without any trouble. Try to remember what type of animal it was, it might be the sign that your guardian deity is trying to reach out for you.

By analyzing environments, attentive and sensitive people see that the world very often sends them signals, signs, and hints exactly when they need them. By reading them, you can avoid many stressful situations and problems.

The first thing we need to learn is to remember is that nothing happens insignificantly and for no reason in your life. Any life event can turn out to be a lesson provided by the universe.

Oftentimes, massages from the spirit animal come by themselves in the form of dreams or physical symbols like – seeing an illustration of your spirit animal too often, might mean that you need guidance and energy to carry on with planned activities successfully. You also can initiate communication to receive some type of advice from your guardian animal.

Formulate a question, say it out loud like prayers before falling asleep and ask for a sign that will be easily understood by you. Then carefully observe your surroundings around you during the next days. Take on the hints, analyze their meanings, and show gratitude if the answer provided by your spirit animal will be helpful.

Meaning of Horse in Dreams

In a dream, a white horse is a good sign that promises a healthy relationship, the joy of meeting friends, and the loyalty of your partner.

If you dream that your horse is skinny and dirty, it might indicate envy from a close friend, that will try its best to block your path towards new opportunities.

A black horse signifies that you will be busy with improving your career and maybe get promoted after hard work.

To see yourself riding a horse means ultimate happiness and joy. Walking next to it promises comfort and tranquility.

If you are riding a horse and suddenly it changes direction, expect trouble from a friend or co-worker.

In general, seeing a horse in a dream indicates an increase in wealth and joy in all areas of life. Horse running around freely symbolizes a reduction in obligations and fewer obstacles. If you ride a horse on a high mountain, and it falls, but you still manage to arrive at your destination – it’s a sign that you will accomplish your desired goal, but to do so, you have to confront enemies and people blinded with envy on your way.

Meaning of Horse in Various Mythologies

Pegasus – According to ancient Greek mythology “Magic Horse”, was one of the favorite creatures of the Muses (daughters of Zeus and the goddess of memory – Mnemosyne). The origin of the word – “Pegasus”, is unknown and it is considered as a substitute word. It is known that Pegasus was born from the blood of Medusa killed by Perseus. According to another version, however, Pegasus was the creation of Medusa Gorgon and Poseidon. Pegasus could fly as fast as the wind.

Unicorn – It is a legendary creature with a body of a horse and the head of the Rhinoceros, a mythical animal that is a symbol of purity and love. Many believe that this mythical animal existed, but they were killed because of their horns, which had healing properties.

Centaur – creatures of Greek mythology; a powerful descendant of Thessalian tribe, forest and cave demons, monsters; Monstrous and horrific creatures that have a horse body and a human head, chest, hands, and mind. The representation of these terrifying creatures was probably based on the example of a scary Thessalian tribe of warriors on horseback who “never came off a horse.” The Greeks themselves used to tie the horse only a chariot, and when they first saw the actual human riding on top of the horse, they immediately visualized them as centaurs from afar.