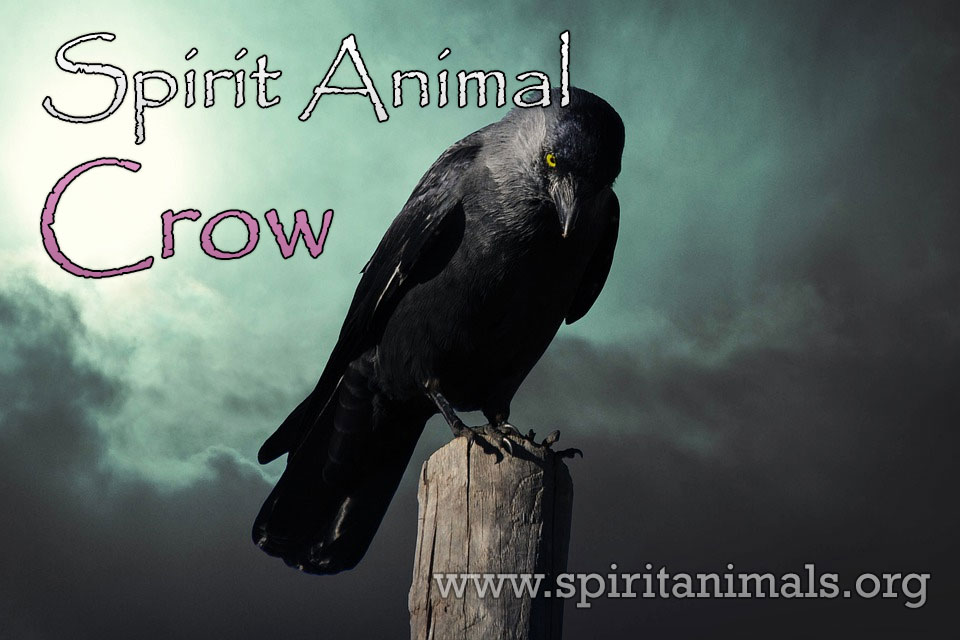 You may not consider the crow to be the most gorgeous animal on the earth, only a few people consider this bird – to be their first pick among spiritual creatures. Crows symbolism, on the other hand, may be more powerful and dignified than you might believe. In this article, we’ll look into the crow’s symbolism and analyze what could it mean for you – once you find yourself connected to the crow as your guardian spirit animal.

What is the definition of a spirit animal? – Before we get into details about the characteristics of the crow spirit animal, it’s important to first grasp what the term itself implies.
A spiritual animal is an energy represented in an animal form, that is your guardian and spiritual teacher.

Each animal has its powers and they differ by all means.

Meaning and Symbolism of the Crow as Spirit Animal

Crow represents the soul’s journey. In old cultures, this spirit animal had a somewhat sharp meaning: the messenger of death that came to guide the souls of death into another dimension.

The spiritual meaning of the crow, on the other hand, has evolved with time and is now more akin to resurrection than death.

When we talk about the crow as a spirit animal, we must visualize transformation, metamorphosis, and new beginnings.

This spirit animal isn’t about dying; it’s about letting go of the past. This deity enters our everyday life and our routine to bless us with its intelligence and skills of adaptability.

In life, there will be moments when our emotions lead us down an irrational route, and when a rash arises, we are reminded that we should sometimes stop listening to our hearts and instead listen to our heads.

In the beliefs of old shamans and ancient tribes, crows have long been thought of as divine messengers, so whatever subtle notions they send us – each of them should be taken seriously and analyzed accordingly.

Crows have been co-living with other creatures for as long as humans have been around, if not longer. If a cow appears to you in a dream, the cleverest thing you can do is – ask it for advice or ask it about upcoming future events. These deities have a significant connection to the collective memory and they are considered the most powerful fortunetellers.

When crows as spirit animals send us messages or guide us on spiritual paths, they often bring different degrees of luck with them. The ancient Greeks considered crows a good omen, that prophesied victory in battle and future destiny.

For many people today, this belief is still true, but the general strangeness of the crows will contradict many of the opposite views: it is still seen as a sign of doom and death, because of its mysterious and dark appearance.

Crows are above-average intelligent animals. The power animal crow is also surrounded by a certain aura of mystery. We – humans, are so attracted to these beings because they symbolize the space between earth and sky, which cannot be explained with logical reasoning. They carry the hint of magic and mysticism with them, which is always interesting to analyze.

Many people are afraid of death and don’t even dare to think about it. The power animal crow encourages you to face this topic today because it is very important for you to live your life to the fullest – each day. Birth and growing up are just as much a part of this life as passing away and dying. The crow brings you comfort and promises from the Otherworld that death does not mean the end of life, only the frequencies of existence are changed. Imagine a snowy mountain, when it melts it no longer exists in its original form, but shifts as a beautiful river and continuous life in a different form. Crows carry that beautiful massage, that you shouldn’t see death as an enemy to conquer, but as a challenge to your spiritual growth. Neither this world nor the hereafter is better or worse, just two different energetical frequencies you have to merge into.

Adaptive – People that are connected to the crow spirit animal are adaptable and have elastic-like energy, a desire to bend and break habits, and a willingness to push themselves as their circumstances change. They are more likely to confront issues, pivot amid diversions, and respectfully go forward. Adaptable persons are more likely to plan and strive for continuous growth.

Teamwork – Collaboration is required in the workplace to attain goals. Developing excellent collaboration abilities may help you thrive in your job, regardless of your level or sector, whether you are presently part of a team or are planning to join one. If you are deeply tied to the crow spirit animal, then this trait might be easier for you to obtain. You will find it easy to work with your kind and thrive for career development through the help of others, and during the process provide as much guidance as needed.

Loving – You are most likely a person who appreciates connections if the crow is your spirit animal. You recognize that the most valuable thing in life is connections. It’s not what you know, but who you know. The crow spirit advises you to take care of your connections, including your family, friends, coworkers, and, most importantly, your significant other.

Revengeful – Sometimes people tied to crow spirit animals tend to be revengeful. We might use that term to describe a person who is resolved to exact vengeance—retaliation for or punishment of someone for any form of the hurt they inflicted or transgression they committed. People with crow spirit energy hold grudges and they know how to come for you if you cause them harm.

Aggressive – a person who has a crow as a guardian spirit might have a quality of anger and determination that makes them ready to attack other people. Sometimes aggressive behavior is a sign of emotional distress, which they need to take care of with the help of tenderness and understanding.

Since ancient times, the crow has been regarded as a totem animal. The crow was thought to be a harbinger who could guide people’s souls to the afterlife. The Holy Law and prophecy are likewise said to be guarded by a crow.
However, a new period has given the crow new significance as a spiritual emblem. The crow is now said to represent a new stage in a person’s life. When a crow enters your life, it symbolizes its time to let go of the old since something new has arrived. When a crow appears in your life, it means it’s time to take a closer look and reconsider your options.
The crow is often associated with ill luck and death, however, this isn’t always the case. A crow, as previously said, might be a sign of life magic and secrets. It also represents intellect, adaptability, and fate.

How to Call Animal Spirit of Crow for Help?

It is vital to adopt a comfortable posture and maintain a calm breathing pattern. Then picture yourself amid nature, where your consciousness yearns to be. Sit on the ground for a while, then stand up and begin your quest. If you’re in a forest, take a walk through it, along a stream or river, and peek into the clearings. You won’t have to wait long for your energy patron. If you are comfortable enough – it’ll approach you and you’ll be able to sense each other’s energy. The encounter might be highly different in each scenario. Chat with your spirit animal, try to communicate with it on a deeper level, ask it questions and plead for blessings from the universe – so your affirmations can manifest in this lifetime, explain your wish and ask it to be under its protection and patronage, and thank your spirit animal for making itself known to you.

Many people have an unconscious affinity to animals, and they want to contact them whenever they can, buy paintings, toys, and sculptures with their images, and even obtain one as a pet.

Usually, spirit animals come to you spontaneously, it will appear in the form of images and visual representations in your dreams; you will see repetitive visions of it everywhere, and then you will know – that is exactly your guardian spirit animal you have been calling for.

A modern individual, consumed with the incessant drive to obtain money, fame, and recognition, may require the protection and patronage of a higher power, a guardian angel, or a magical amulet from time to time. Many individuals shift their tired attention to diverse peoples’ old beliefs and customs.

Once you have found your guardian animal and feel a connection to it, it might communicate with you through dreams, through your visualization, or meditation practices. Remember, these spirit deities don’t require knowledge of some type of old linguistic patterns, communicating with them is very emotional and is based on feelings and visual representations.

Meaning of Crow in Dreams

Dreams about crows can have a variety of interpretations, but they almost always convey messages from our subconscious. Of course, if you want to figure out what your dream about crows means, you’ll need to remember all of the details you saw. It’s also vital to think about the context of your crow in a dream. If you have a dream about a crow soaring, it means you need to communicate sentiments that are concealed deep inside your subconscious. It’s important to bring those feelings and thoughts to the surface and share them with the rest of the world. This is the only way to move on and leave the past behind. Maybe you have held too much love inside and had trouble expressing this warm feeling to your loved one, or your family. Take it as a sign that you can step up and express everything you have been holding into your heart for too long.

It’s also possible to have nightmares about crows devouring each other. This dream is a positive omen, indicating that you will achieve great success in the future. Maybe you put in a lot of effort and battle yourself or your surroundings – to achieve your objectives. You will have success shortly and will be able to accomplish all of your objectives with ease. This dream should also serve as a warning to reconsider whether or not what you have makes you truly happy.

Meaning of Crow in Various Mythologies

The crow is often associated with ill luck and death, however, this isn’t always the case. A crow, as previously said, maybe a sign of life magic and secrets. It also represents fate and adaptability. If a crow comes into your life, it may indicate that you are going through a period of personal transition and that it is time to learn more about yourself. In shamanic traditions, the crow has long been regarded as a powerful animal. It was utilized by those who desired to dominate the cosmos as their preferred power animal. In addition, all people who performed witchcraft in old shamanic traditions used a crow as their familiar.

Crows are a sign of prophecy and good fortune in Greek mythology.

A crow has been connected with mystical things since ancient times. The appearance of a crow in your life should serve as a reminder that you are surrounded by magic. This mystical bird has long been associated with witchcraft and a variety of ceremonies all across the world.