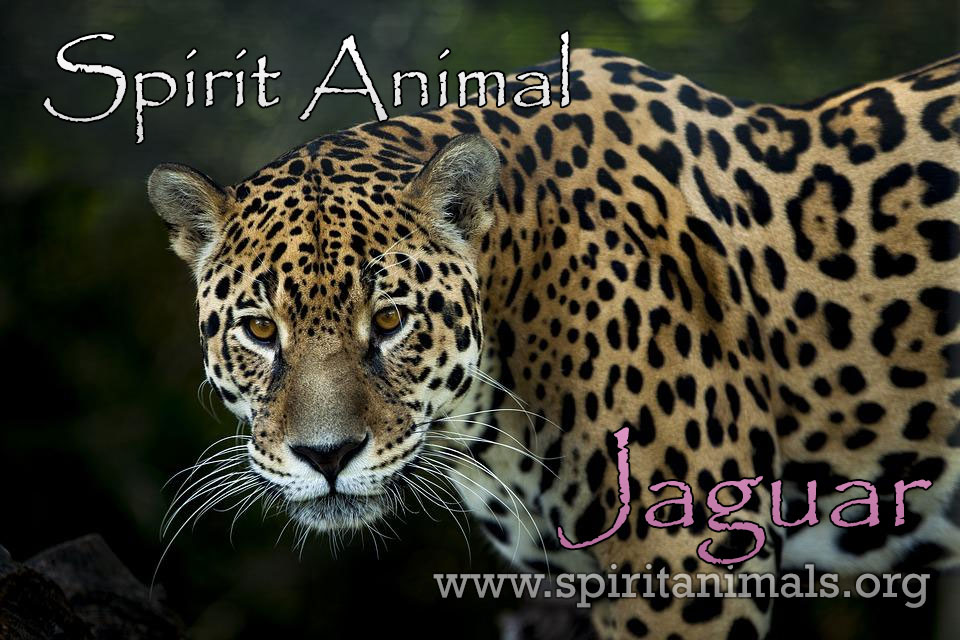 From the shamanic tradition, these deities are spiritual guardians that take the appearance of animals. The spirit animals accompany and counsel humans on their journeys, providing strength, wisdom, and even a warning when necessary. The individual power animal, unlike the zodiac signs and ascendants, is not linked to the day or time of birth. The power animal appears in a variety of forms.

It makes no difference if your power animal is large or little, visible or unseen, weak or strong. Because everyone is given particular characteristics that carry the appropriate messages or energy for you, i.e. are exactly suitable for you! The fascinating symbolism of the jaguar spirit animal is listed down below!

Jaguar as a spirit animal symbolizes wisdom, power, and authority.

Because it exudes enormous power, the jaguar merits its status as a powerful animal. First and foremost, the vigor with which it goes about its life is remarkable. Jaguar takes bold, self-assured steps while remaining soft and beautiful on its course. it is a highly intelligent hunter who kills what is no longer viable. Jaguar knows the vast mysteries of life and is a very wise hunter. Because it has no natural adversaries, its potential is endless. The indigenous peoples of America did not adore the jaguar as a god for nothing. When the shamans needed wisdom or instruction from the Otherworld, they went to the jaguar spirit, which could guide the purest form.

Meaning and Symbolism of the Jaguar as Spirit Animal

A powerful old spirit animal – the jaguar is a magnificent and ancient spirit animal. The Black Jaguar is a sign of courage and ferocity, as well as an alluring combination of beauty and endless potential. It is gifted with wonderful elegance and amazing speed that makes it incredibly successful at attaining what it wants. When it comes to pursuing your ambitions, the Black Jaguar wants you to have these attributes in their finest form.

The strength of silence is symbolized by the jaguar spirit animal. It’s crucial to know when to make your presence known and when to conceal it, much like when a black jaguar discreetly hunts or pursues its victim.

Your strong sensitivity to picking up vibrations is also represented by the jaguar symbol. It emphasizes the significance of paying attention to your emotions, as well as hearing the unsaid words and sentiments that must be communicated on a deeper level.

The secret gifts that you should share with the world are symbolized by the jaguar spirit animal. Your beauty, power, strength, elegance, and intelligence are all part of this.

It also represents your quickness and agility when it comes to addressing difficulties. It’s about grasping the turmoil and forging forth through your life’s worst moments.

The jaguar’s mystical gaze exudes a tremendous deal of intrigue. When it looks at you, it appears to be able to see right through you, seeing your innermost thoughts, feelings, and secrets.

Power, strength, and bravery are all symbols associated with the jaguar. It’s all about recovering your actual strength and staying out of trouble.

It teaches you to believe in your instincts. A Jaguar spirit animal might be also helpful for you when you are dealing with love issues that are hard to solve and are very stressful.

The Jaguar spirit animal is associated with introversion and avoidance of big gatherings and social events. They thrive in small groups or on their alone. This deity is also considered a non-aggressive creature. They are, nonetheless, eager to defend themselves when needed.

It represents the beginning, maturity, and profound understanding of an outer world. It helps you to connect to your inner voice and your heart’s desires. Jaguar spirit animal urges us to stop choosing between the mind and the heart, between power and control. Your life’s options are infinite. Use the jaguar’s powerful abilities and unmistakable instincts to confidently follow your destined road. It’s your life; don’t waste time arguing with yourself and overthinking things. Act as though you’re in the moment. You are sufficient in your own right. Even though you’re surrounded by worries, you already have all you need – the jaguar can help you recognize this.

These spirit animals also like waiting until the last minute to make a move. This unique stability and ambush tactic are frequently used in everyday life. People that have this power animal as their guardian is drawn to the dark and like to do most of their activities after the sun has gone down.

Jaguar as a spirit animal symbolizes:

Emotional intelligence – Emotional intelligence aids in the development of better relationships, academic and professional success, and the attainment of career and personal objectives. It can also assist you in connecting with your emotions, putting your intentions into action, and making educated decisions about what is most important to you. And that’s what the jaguar spirit animal is good at.

Confidence – People connected to the jaguar spirit animal, tend to be confident in any given situation. Confidence enables us to feel prepared for life’s challenges. We’re more inclined to go ahead with people and chances when we’re confident, rather than shy away from them. If things don’t work out the first time, confidence encourages us to try again. When confidence is low, the reverse is true.

Strong will – A strong desire to achieve must be ingrained in your thoughts. If we want to achieve in life, we must take chances. It all goes down to having the correct mentality and believing that everything will turn out exactly how we want it to. This type of mindset is pretty prominent for people connected to the jaguar spirit animal.

Honest – In a relationship, honesty is the cornerstone of trust, and trust is required for a partnership to operate and grow. When you’re always truthful with someone, it shows them that you can be trusted and that you mean what you say. It gives people confidence that they can trust your promises and commitments.

Introverted – When someone refuses to help and doesn’t engage, this is the number one symptom of a “bad introvert.” It’s mostly a fear of failure, rather than a personality flaw. It’s one thing to stay “silent” because you don’t like chatting in groups. Withholding information is another matter entirely.

Selfish – If you don’t allow it, being selfish isn’t a negative thing. When you simply do what’s best for you and don’t care about how your actions affect others, you’re being selfish. And that might be a problem for the jaguar spirit animal.

The jaguar as a totem is a powerful animal, that exemplifies unlimited potential.

It keeps an eye on things, waits for the right moment, and always appears to obtain what it wants at the very right moment. Nobody can get in its path.

Jaguar as an animal totem has a mystical ability that can take us to another realm.

This animal totem activates the wisdom of one’s own heart and self-confidence in one’s abilities. It is a discoverer, a traveler who manages to survive on its own.

Having a totem that is symbolized by jaguar characteristics helps the host to establish contact with the soul and mind.

No one will be able to dupe or mislead the Jaguar totem. So having it as your luck symbol, will help you to detect lies in every situation.

Jaguar only comes out once in a while and knows just when it may leave his hiding place. The spirit animal jaguar illustrates this distinction between emotions and feelings – when and how to show them.

Those who confide in the jaguar spirit totem enthusiastically will gain a greater understanding of themselves. Through this totem, the unconscious forces can be better analyzed.

How to Call Animal Spirit of Jaguar for Help?

You must first find and connect with your spirit animal before summoning it!

Having a strong will of connecting with your spirit animal is a core method of actually doing so.

Ask your spirit animal to come anywhere, in any form – whether it is a visual depiction of an idea – when you wake up in the morning. During the day, you’ll very probably hear someone mention your spirit animal, see its image, or read about it, and you’ll know right away that it’s made its presence known to you!

Animal spirits often make themselves known through our dreams.

Dreams are one of the most essential ways to communicate with the spiritual realm. Repetitive dreams, as well as the vivid details noticed in them, should be given special attention. The majority of the time, spirit animals present to us in our dreams.

While these dreams are often obscure and perplexing, attempt to remember, write down, and study them. You most likely experienced vivid dreams as a youngster, or even today, in which you were able to speak with any species of animal without difficulty. If you can recall what kind of animal it was, it might be a sign that your guardian deity is attempting to contact you.

To understand the message of your spirit animal, you need to practice meditation and visualization.

For that, you need to find a quiet place and concentrate on your breathing.

Envision your ideal surroundings by imagining yourself alone in a place where no one can disturb your tranquility. It would be much better if this vision was tied to nature in some way.

Now it’s time to ponder about your spirit animal. Imagine your guardian jaguar quietly emerging from the forest and settling right next to you. Look at how beautiful, and dazzling its fur is. A divine being who brings powerful energy with it.

It will also deliver messages to you with the power of the mind and mutual understanding.

Meaning of Jaguar in Dreams

You should be extra mindful of your surroundings if the jaguar spirit animal appears to you in your dreams.

There might be danger hiding around the corner, and your overconfidence could put you in danger unknowingly.

The jaguar spirit animal also represents health issues that you must tackle now to avoid having to deal with them later.

Do everything you need to do today to prevent the situation from worsening and to ensure that you have excellent health for a long time.

You must increase the pace of your job and hobbies while retaining a sense of balance. Don’t put too much pressure on yourself! A jaguar dream might also indicate that you need to pay attention to what is going on around you right now.

If you see a jaguar emerging from the bushes suddenly and chasing after the prey, it might indicate that soon you will obtain what you desired very much.

Meaning of Jaguar in Various Mythologies

The jaguar was viewed as the lord of the Underworld in Mayan mythology, and as such, a symbol of the night sun and darkness. The old tribes worshipped the energy of the jaguar in the form of totems and wall inscriptions. The Inca, like the Aztecs and Mayans, created temples to the jaguar.