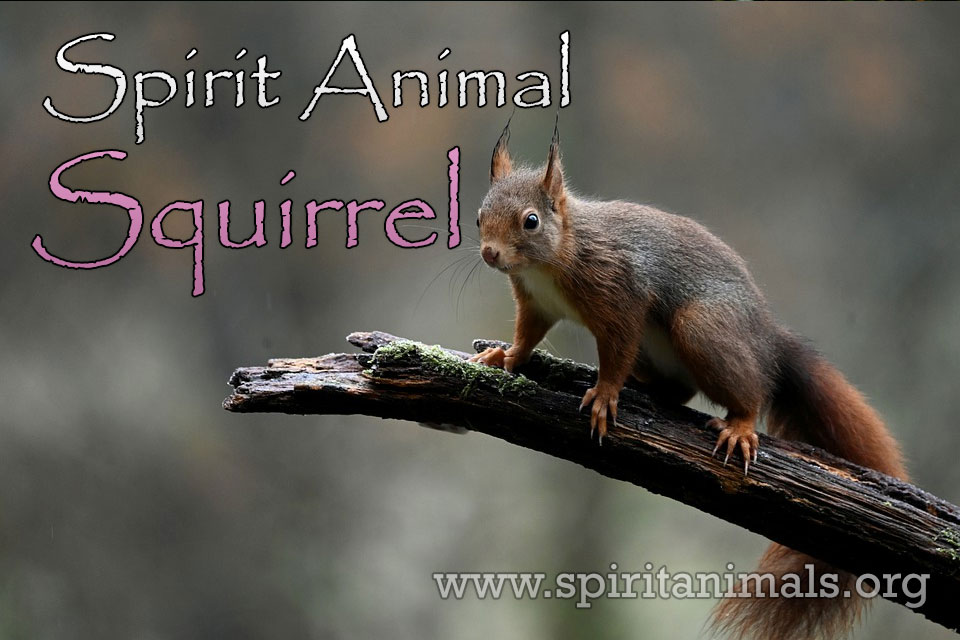 A spirit animal is a guardian of a person, a true spiritual supporter throughout life. People believed that all living things had a soul – including animals. They communicated with the spirits of animals – also called their patrons. They tried to get vital knowledge, energy, and skills with the help of guardian spirit animals.
Each person has their spirit animal, and it determines the character and abilities of that individual.
Different cultures believed that animals and people were spiritually connected by an invisible thread. So, each individual was characterized by traits of their unique guardian animal. The spirit animal provides ultimate protection, gives strength and vital energy.

In this article, we will discuss the interesting characteristics of the squirrel spirit animal, and if the description resonates with you, you will be able to find further information on how to connect with your guardian animal’s energy with different methods.

Due to its small size, the squirrel has many natural predators. But this little animal is fast and smart and often manages to outrun its enemies.

The symbolism of squirrels has several different interpretations. In most cases, these animals represent life energy, speed, intelligence, and alertness. Squirrels are mobile animals, always attentive towards their surroundings.

Meaning and Symbolism of the Squirrel as Spirit Animal

Squirrels as spirit animals represent the harmony of nature and balance in life, and they also symbolize good luck, fortune, and happiness, perhaps because the indigenous peoples of North America consider these creatures to be positive spirits that bring good luck, prosperity, and good fortune.

Another meaning given to them is the balance between thoughts, action, instinct, and luck, which is always necessary for survival. This is why squirrels are also considered a symbol of survival.

They also symbolize fun and easy life. They enjoy life, so they also represent the importance of having friends and maintaining good relationships within the family.

Other interpretations of the squirrel spirit animal are the love of adventure, restlessness, freedom, and courage.

If you identify with a squirrel spirit animal, then you are an extremely positive person with many positive qualities and abilities.

In addition to being incredibly smart, you are full of energy and have a playful spirit, which makes your company very desirable and interesting!

Modesty is also a very common trait for a squirrel spirit animal. If the energy of the squirrel guardian animal resonates with you, it means that little things make you happy, and it is easy for you to find delight in everyday life events.

Squirrel as a spirit animal is adaptable and flexible, so it rarely clashes with others.

They are also attentive and quick in making decisions. Creative and skilled, this spirit animal adores intellectual challenges and is brilliant in both art and math.

Those who identify with a squirrel guardian deity, are organized tactful people, act when necessary, and come up with solutions quickly.

On the other hand, we can say that these power animals, lack patience: a little thought before making certain decisions can be a good idea. Sometimes they are in a hurry and act too fast.

Despite their modesty, sometimes they can exaggerate their successes; But glorifying the achievements is not based on their vanity, as it is mostly caused by letting the imagination run wild and fantasize about what could have been.

You can learn from this animal how important it is to spend time making your life and the life of your loved ones more pleasant, happy, and easy.
Squirrel spirit animal allows you to enjoy the simple pleasures and blessings of life. It teaches you that there will always be problems, but with a positive outlook on them, it is easier to overcome those obstacles.

Squirrel spirit animal finds joy in the process of achieving their goals and aspirations, rather than focusing on actual achievements and completed results. So, with the help of the squirrel spirit animal, you will learn to enjoy the journeys, along with their obstacles and delights.

Flexible – Squirrel spirit animals are known for their ability to be flexible in unknown environments. They do not fear strange situations and it’s easy for them to adapt to new social settings. Their wit and intuition allow them to showcase their best traits in any given surroundings and charm others with their social skills and attractive and kind nature.

Uplifting – these spirit animals are known as the harbingers of joy. It is easy for them to find happiness in the little mundane things and also provide positive vibes for their friends and family. They enjoy making people close to them happy. Individuals associated with a squirrel spirit animal try their best to always show their good and positive side.

Attentive – squirrel spirit animals are very good at catching signals from the outer world. They feel when something is wrong and can pinpoint the hidden intentions behind every action, so lying to them is a very hard task.

Impatient – these spirit animals have a hard time dealing with long-term processes. They want to achieve everything in a short time and see the results right away. That is why sometimes people connected with the squirrel spirit animal tend to easily give up on their aspirations, which can be only achieved in a long period.

Fearful – even though courage is a very common trait of squirrel spirit animals, they sometimes tend to overthink things to the fullest, which leads them to withdraw from competitive situations and return to their cherished comfort zone. Once these spirits learn how to overcome their fears, they will open their hearts to new opportunities.

A totem is an object of worship in ancient religions. The totem can be, for example, an animal, plant, or any other earthy element. The word “totem” originates from the language of the American Indians and means “master”.

The Squirrel as an animal totem is a symbol of a sense of gratitude – housing in your heart and filling you with those positive emotions that are beneficial to both the mind and the soul. This totem helps us to concentrate on expressing gratitude for the wonderful things, events, or people around us. The more gratitude you show, the more pleasant experiences you will attract in your life. In other words, the Squirrel totem pushes us to live our lives and focus on the positive aspects.

How to Call Animal Spirit of Squirrel for Help?

Manifesting connection with your spirit animal is one of the most acknowledged methods in spiritual practices.

Firstly, you have to be attentive to the signals that the universe is sending you. Once you identify your spirit animal through these massages (like seeing specific animals too often in dreams or seeing their symbolism very often in real life), you can move to the next step and start establishing a secure connection with your guardian animal, to call it for help in needed time.

Before falling asleep you can manifest the connection with different types of affirmations. For example, if you want to summon the energy of a squirrel spirit animal, to boost your life energy and become happier you can do the following:

Close your eyes, imagine a tiny thread connecting you to your spirit animal. Feel the connection deepening as the seconds pass by. Now visualize receiving the vital energy from your guardian spirit animal, with the help of this thread. Ask help through affirmations, like: “Give me the guidance I deserve”.

You can formulate the affirmations according to your liking, the main point is to feel the energy flowing through you, as soon as you visualize the connection between you and your spirit animal.

The relationship with the spirit animal takes place on a subtle plane – in dreams, the astral world, visions, meditations, trance …
Usually, people connect with their spirit animals during dreams. Try to remember if you had repetitive dreams about communicating with the same animal over and over again. These dreams don’t necessarily need to involve some type of direct communication. Even if you see some type of animal from afar in your dreams, it means that your guardian spirit animal is trying to make itself known to you.

Also, there have been instances, where people found their spirit animal after analyzing the massages that the universe was sending them in real physical life. For example: coming across the visual representations of an animal too often in your everyday life, like seeing squirrel illustrations all the time and so on…

Try to catch those signals and be attentive towards your surroundings.

How to Understand Your Squirrel Power Animal’s Message

It is very important to be open to receiving messages from your spirit animal.  A spirit animal communicates with us, we understand its “language”, in our dreams, for example, there are no barriers during our communication.

As mostly our guardian deities prefer to visit us during dream states, where our communication is free of obstacles and misinterpretations, it is quite easy to analyze the messages that are provided to us in those sleepy states.

Try to remember how did you feel when dreaming about your spirit animal, did it make you happy? Or were you anxious about certain things? These feelings might indicate your upcoming journeys. If you felt delighted while being near your guardian, it might mean that everything will go according to plan and the outcome will be better than expected. If you felt worried after communicating with your power animal, then make sure to analyze things once again and be careful what kind of actions you will undertake to achieve your aspirations.

Meaning of Squirrel in Dreams

If you dream of squirrels chasing you, you might face some little financial loss because of unexpected circumstances.

Dreaming of the squirrel collecting different types of nuts might mean that you have to start saving up money. This type of dream usually gives us signs to go easy on spending too much money – or give up on impulsive shopping and invest our finances in something more important.

Meaning of Squirrel in Various Mythologies

In ancient times, the squirrels were linked with various images in legends and beliefs. The brisk and mobile nature of the squirrel evoked negative symbolism in Slavic beliefs.

The fiery squirrel acted as the embodiment of the elements of fire, thunderstorms, and lightning. Ancient beliefs represented the animal as a harbinger of war and misfortune. The mobility, playful mood of the squirrel was associated with demonism and deceit.

The Squirrel is often presented in fairy tales, as a magical animal – jumping along the branches, showing the way to the wanderer to find golden treasures.

The squirrel was considered the totemic animal of the god of thunder Perun. The ancient Slavs believed that the image of a squirrel on talismans and the claws of it, could bring good luck and improve persons’ well-being.

European legends associated the squirrel, with greed. The duality of the symbolism of the squirrel embodies thriftiness, homeliness, hard-working capacity, and the negative qualities of selfishness and greed.

Scandinavian mythology describes the squirrel as a malevolent mediator in a quarrel between an eagle and a serpent. The animal lived on the huge tree and constantly moved up and down, delivering massages from one animal to other.

In Japan, the animal was depicted with a vine as a symbol of fertility, abundance, and harvest. Squirrel is a symbol of the embodiment of creativity and the ability to find an original solution to difficult situations.

The animal was sacrificed to the Mayan gods in South America. Among the Zoroastrians, the squirrel appeared in the horoscope as the patron of a certain year. According to legend, the animal gifted people born in this year with vital energy and mobility.