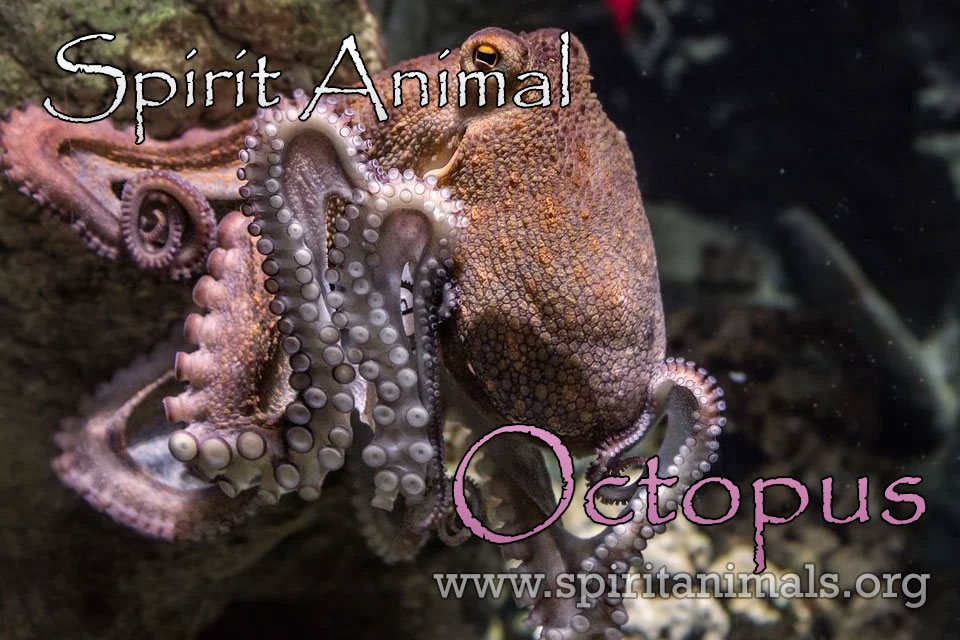 Spirit animals are our powerful partners – guides who provide us safety and protection and stand with us in the hardest phases of our life. The strong bond with a spirit animal is consequently of very unique importance. Spirit animal, can provide messages to us, offers safety, power, and self-belief, and accompanies us on our way.

Power animals assist us also during decision-making. Shamans consider that each man or woman has one or two guardian spirits who guard and empower them and help them to make the right decisions. A person’s guardians are known as power animals/spirit animals/spirit beings.

In ordinary life, everyone can invoke their spirit animal, whilst they wish for its energy, when in danger. Knowing how to call your spirit animal might be very helpful during those times.

Power animals also are known as spirits that got assigned to us since our birth and their main role is to accompany, protect and heal the soul of their “host”.

Meaning and Symbolism of the Octopus as Spirit Animal

The octopus energy animal symbolizes empathy. The emotions of others are perceived intensively by a person who is connected to an octopus spirit animal.

With the strength of the octopus, you can easily tune in with the depth of your soul and connect to your shadow self. The octopus, which also can stay within the depths of oceans, would like to remind you that there’s light even within the intense darkness. Octopus as a spirit animal also symbolizes forgiveness and acceptance. Forgive the ones who’ve brought you pain and forgive yourself for taking the weight and permitting the ache to live inside you. If you connect yourself with the octopus that guides you, many new opportunities will arise on your way. You will gain so-desired peace of mind, and you will be able to let go of old grudges that were holding you back for eons. Octopus as a powerful animal also symbolizes freedom of mind and guilt-free living. You might have committed sins or have acted in a way towards people close to you, that caused the biggest of regrets in your life. Octopus as a spirit animal will empower you to forgive yourself and live more of a guilt-free life.

The octopus was a symbol of eternity and wisdom in Celtic culture because of its circling motions. The octopus totem attracts you into an energy realm where incredible secrets might emerge.

As it glides through the water, the octopus takes on delicate, elegant, and lovely shapes. As a result, it has become a symbol of adaptation, ingenuity, and flexibility. The spirit animal octopus’ mind and its mysterious side are amplified by its surroundings, which constantly shift its location in response to the moon’s gravitational pull.

The octopus is one of the fast-moving species that likes to travel and change its environment too often. It can swim high up on rocks as well as far down into the ocean. It is related to both earth and water in totemic symbolism. This personality trait is very common in people who have an octopus as their spirit animal. This totem serves as a reminder that we may be spiritual as well as intuitive. Nonetheless, we are physical beings who must thrive to develop our mental abilities and always aspire for better living conditions and living standards.

The Octopus as an animal spirit animal symbolizes:

Mystical – Octopus as a spirit animal is all about possessing a spiritual or holy meaning that goes beyond basic human understanding. People who are connected to octopus spirit animals are always mysterious in their way. It is a pleasure to communicate with them, as they have a much deeper understanding of everything, and they do not fear expressing their shadow selves with other people.

Flexible – You can cope with unanticipated obstacles swiftly, calmly, and efficiently if you are adaptable – this trait will be the most prominent one If you are deeply connected to the octopus spirit animal. But flexibility isn’t only about reacting to events when they emerge. It also entails significant changes in the way we think, work, and act. We must know that Invertebrates also include octopuses. This trait in a spirit animal speaks to us at the level of flexibility and agility at a totemic level. As though it were pure water, the octopus can escape out of the tightest spaces. The octopus’ movements are fascinating. it reminds us that we may always attain our goals in unorthodox methods and save ourselves from unwanted spaces and happenings.

Intelligent – The octopus is very clever, with the capacity to analyze, plan, and recall knowledge. The octopus teaches us that we must learn to be masters of our intelligence rather than slaves to it. The octopus is a good model to follow when it comes to improving your thinking ability.

Regeneration – The Octopus may regenerate by removing its limbs and then restoring them later. To us humans – this demonstrates that we cannot shed our essential characteristics. We are the sum of our parts, and even the ones we lose are still a part of our identity and play a role in our life path. The octopus teaches us a valuable lesson about rebirth and regeneration.

Deceiving – Another spiritual metaphor for octopus’s ability is an illusion. Nothing is as it seems, as the octopus reminds us. Behind our bodily sensations, there may lie a concealed truth. Observing the octopus’ mystery inspires us to look back and glimpse a different reality. The octopus frequently glides in spirals. It was regarded as a sign of wisdom in Celtic or Greek culture – wisdom to create perfect illusions. But sometimes people with octopus spirit animals, forget that there is no need to deceive people and put on different masks every time they communicate with new surroundings – it’s important to be authentic.

Fearful – People were aware of the octopuses’ sensitivity and knowledge, and it was assumed that they suffered immensely and were scared of humans. When they are found, they are often so terrified that they attempt to defend themselves with a tremendous deal of aggression and end up hurting themselves. It’s important to be brave in certain situations and not perceive everything as a threat.

The octopus teaches us that everything is interconnected and grows on itself in a circle. You are who you are because your forefathers and mothers lived and created the world you live in – the world that shaped you into the way you are now. It’s possible that you didn’t exist today, or that you could have been a different person in a different body. In this chain of life, everyone accomplishes their duty and follows its destined path. Everything that occurs influences the everlasting cycle. You can’t go wrong as long as you approach everything with a good, loving mindset. The octopus encourages you to consider how your actions impact the future of all of us in whatever you do.

If you decide to have an octopus as an animal totem – it will help you to find your mission in this lifetime and give you a deeper understanding of the cycle of life and its meaning.

How to Call Animal Spirit of Octopus for Help?

It is important to know that the octopus as a spirit animal represents willpower, focus, magic, rationality, and even deception. The octopus as a deity empowers everything we have in terms of strategic skills and potential within us. It’s a symbol of wisdom and flexibility. If the octopus spirit animal has blessed you, you will undoubtedly have an insatiable quest for knowledge. Allow the octopus to lead you and orient you. The octopus is a highly vast power animal because of its enormous curiosity, which helps its hosts to explore the depths of unknown seas.

Once you find yourself drawn to the qualities of an octopus spirit animal make sure to visualize its energy, to manifest its guidance in your everyday life.

Before falling asleep try to connect with your guardian spirit animal with the help of the mind. Send it massages telepathically and ask exactly what you are wishing for. Your guardian animal will hear your pleads and help you to manifest everything you have wished for.

You might come across the illustration of the octopus way too often, maybe you even dream of sailing across the sea with your comrade octopus every night. Make sure to tune in in these massages and analyze these subtle signs, as it is a representation of your spirit animal.

Our power animal will mostly communicate with us during dreams. We will see them coming to us in our dream states and this is the perfect time to converse with them on a deeper level, as in dreams language doesn’t have barriers and we can connect to the most spiritual deities even.

“Spiritual entities” like power animals don’t have specific “messages” for humans; all they have is their spiritual potential waiting for us. They push us to go within ourselves for solutions in a self-directed and responsible manner. We may connect with the mental and spiritual energy of the power animals if we listen to ourselves. In this way, our intuition might lead us to vital insights for our life path.

The octopus can cut off a limb to distract potential hunters. On a spiritual level, this shows us that sometimes we have to give up things to move forward. The octopus as a spirit animal asks us, “Do we need to let go of something in life to lighten our burdens? What part of us do we have to leave behind to improve and achieve our goals?” Often some things act as distractions and take us away from our goals (addiction, television, poor social relationships, etc.). so, make sure to analyze these messages and provide answers or solutions to them.

Meaning of Octopus in Dreams

If you have a dream about an octopus, you might want to accomplish many things at once. Because of its eight arms, the octopus appears to be able to accomplish this with ease, which might indicate to the dreamers that if they stay disciplined and perform one thing after another, they can be calm and handle all of his undertakings. However, if you have a more chaotic mentality, the dream sign “octopus” might be a caution to people who are affected not to take on too much at once, as they will rapidly get overwhelmed and lose track. As a result, you will be forced to admit that you had failed to carry out your ideas.

If the octopus in the dream attaches itself to the dreaming individual, it will most certainly indicate that they will be afflicted by a highly unfavorable environment in real life. The dream interpretation here instructs the dreamers to better defend themselves and create required boundaries.

Meaning of Octopus in Various Mythologies

The Kraken is perhaps the most renowned legendary image of the octopus. It’s a fabled sea creature that looks like a huge octopus, according to Scandinavian tales. The Kraken, according to the Norse folklore, lives off the coastlines of Norway and Greenland, terrorizing local seafarers and fishermen. As a result, the Kraken became a symbol of the depths’ secrets. Because the ocean, and water in general, is linked to intuition, the subconscious, and emotion, allusions to the Kraken speak to your deepest wishes. Emotions may loom enormous and even monstrous at times.

Another interesting representation in the mythology of an octopus is Kanaloa. Kanaloa is a deity who is usually linked with Kāne. and is symbolized as a squid or an octopus in ancient Hawaiian legends.